Background: Diverticular disease of the colon is a common condition, the prevalence of which increases with age. In most subjects diverticula remain asymptomatic, whereas in about 20% of cases patients develop symptoms such as recurrent abdominal pain, changing in bowel habits and bloating, which are very similar to the clinical presentation of irritable bowel syndrome. On the other hand diverticulosis may lead to acute inflammation (diverticulitis) with pain exacerbation, sometimes fever and the risk of further complications such as abscess formation, bleeding and perforation. The main cause of diverticular inflammation is thought to be local bacterial overgrowth, promoted by slow colonic transit (constipation) and fecal stasis in the diverticula. HIgh-fiber diet, courses of mesalazine and especially cyclic administration of poorly absorbed antibiotics such as rifaximin, are commonly employed to prevent development of inflammation in the diverticula. Broad spectrum antibiotics either by oral or intravenous route are employed to treat episodes of acute diverticulitis.

Rationale: Manipulation of the gut microbiota may provide a safer and more attractive alternative to the use of antibiotics to prevent diverticulitis. The mechanisms of action of probiotics include inhibition of enteric pathogens, competition with pro-inflammatory microbes, stimulation of local immunological defenses, and down-regulation of inflammatory cytokines such as TNF alfa.

Results: Uncontrolled studies with non-pathogen Escherichia coli Nissle 1917, with Lactobacillus paracasei, a lactobacilli bifidobacteria mixture, and the probiotic cocktail VSL#3 have provided promising results in controlling symptoms and maintaining remission. Other studies have compared probiotics with either mesalazine or a combination of both, the latter appearing more effective in maintaining long-term remission. On the other hand, only two randomized, placebo-controlled double blind trials are available at the present time, one suggesting that Lactobacillus casei plus mesalazine may be more effective than either agent alone and the other one failing to demonstrate a significantly superior efficacy of either Bifidobacterium infantis or mesalazine or a combination of both.

Conclusions: Overall, the quality of the available studies on the use of probiotics is poor, due to the shortage of double-blind controlled studies, limited observational periods in most cases, small samples of included subjects and variable protocols, which make it impossible also to perform a meta-analysis. In view of the sound rationale and the promising, although still inconclusive results, further studies are warranted to better define the role of probiotics in this disorder.

Keynote: From dysbiosis to recovery in the infant gut microbiome: A new paradigm in infant nutrition

David J Kyle is the CEO of Evolve Biosystems Inc., a spin-off of the Foods for Health Institute of the University of California at Davis. He founded several companies during his career, including Martek Biosciences Corp where he led R&D and Commercial Development for over 15 years. His DHA and ARA products are now found in virtually all infant formulas around the world. In 2011, he was acquired by DSM for $1.2B. He received his PhD in Biochemistry from University of Alberta, Canada. During his distinguished career, he published over 80 scientific articles and edited two books. He was inducted into the US Space Technology Hall of Fame in 2009 for his contributions to science and industry.

Statement of the Problem: Human milk has been the sole source of nutrition for infants for millions of years, and is rich in specific oligosaccharides (HMOs). The natural infant gut microbiome is dominated by a single species of bifidobacteria that is exceptionally competitive at consuming HMOs. Through the unintended consequences of formula feeding, antibiotic use, and C-section deliveries, this natural microbiome has been radically altered such that over 90% of newborn babies in the US today are dysbiosis. The purpose of this work is to develop a solution to rescue the natural microbiome from the dysbiosis through an early remodeling that returns the colonic microenvironment to its natural state.

Methodology: A randomized parallel controlled prospective clinical study (n=68) was undertaken in five sights in Davis CA, USA with healthy, term, breast-fed infants enrolled on day four of life. Half of the cohort was supplemented daily for 21 days with activated Bifidobacteria infantis, and half provided the routine standard of care.

Conclusion & Significance: The natural hi-bif microbiome has been lost over the past 50-80 years in developed countries. The resulting dysbiosis may have a significant impact on the programmed development of the immune system and establishment of metabolic set points. We have shown that this dysbiosis can be corrected and the microenvironment reestablished by supplementation with activated B. infantis. 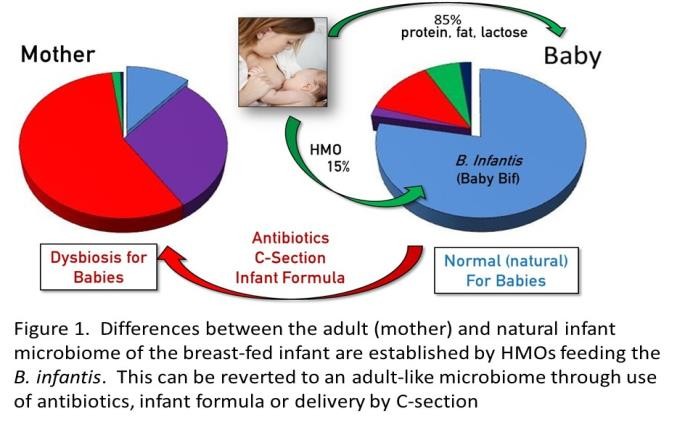